WHO publishes 2019 Report on the Global Tobacco Epidemic

The World Health Organization (WHO) published the seventh WHO Report on the Global Tobacco Epidemic last week, which this year focuses on the progress that countries around the world have made to help tobacco users quit.

The report analyses national efforts to implement the most effective measures from the WHO Framework Convention on Tobacco Control that are proven to reduce demand for tobacco, including MPOWER interventions that encourage governments to:

The report details that since the 2017 report, 36 countries have introduced one or more MPOWER measures at the highest level of achievement, and 14 countries have implemented large graphic warning laws.

The WHO report also found that in the world’s 34 low-income countries, 17 today have at least one MPOWER policy in place at best-practice level compared to three in 2007, which the WHO says shows that income level is not a barrier to best-practice tobacco control.

Dr Tedros Adhanom Ghebreyesus, WHO Director-General, says governments should implement cessation services as part of efforts to ensure universal health coverage for their citizens. He added: “Quitting tobacco is one of the best things any person can do for their own health, and the MPOWER package gives governments the practical tools to help people kick the habit, adding years to their life and life to their years.”

The WHO say that although progress is being made, there are still only 23 that countries provide cessation services at the best-practice level, making it the most under-implemented MPOWER measure in terms of number of countries offering full coverage.

ERS believes that improving access to free smoking cessation services is key to helping smokers quit cigarettes for good. Speaking on this issue for World No Tobacco Day (31 May, 2019), ERS President Professor Tobias Welte said: “Tobacco smoking is without doubt the single most important risk factor for respiratory disease. We know what is effective in reducing the rates of tobacco smoking: high prices on tobacco, legislation to protect children and adults from second-hand exposure, strict marketing bans, regulation of tobacco products, packaging and point-of-sale displays, raising public awareness, and limiting interactions between public officials and the tobacco industry.

“But to further encourage all current smokers to quit so that we can reduce morbidity and mortality from smoking over the next two decades and beyond, these tactics must be combined with effective and free smoking cessation services, which ideally includes professional counselling and free or subsidised smoking cessation medication.”

Resources on tobacco and smoking cessation

Tobacco smoke contains more than 4,000 chemicals, many of which are toxic and can cause cancer. Download in:

Only 15% of the world’s population live in Europe, but nearly a third of the burden of tobacco-related disease occurs in Europe. Download in:

Nicotine addiction is very powerful and only 5–10% of ‘quit attempts’ are successful. Download in:

With thanks to the Tunisian Society of Respiratory Diseases and Allergies (STMRA) for translation. 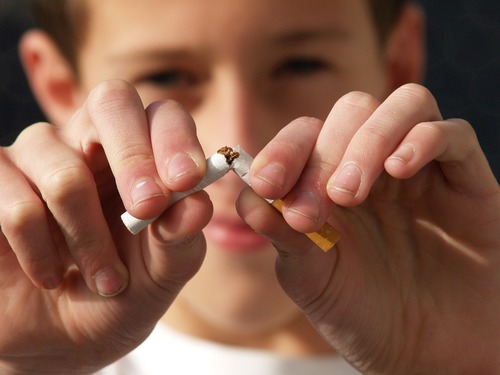