A new statement published by the European Respiratory Society (ERS) Tobacco Control Committee warns that tobacco harm reduction strategies that support the use of alternative nicotine delivery products for smoking cessation are not effective and are based upon incorrect assumptions and undocumented claims.

The statement brings together key arguments based on a number of scientific studies for why a tobacco harm reduction strategy should not be used as a population-based strategy in tobacco control.

Charlotta Pisinger is Chair of the ERS Tobacco Control Committee and clinical professor of tobacco control at Bispebjerg and Frederiksberg Hospital and University of Copenhagen, Denmark. She explained: “Tobacco harm reduction strategies are based on incorrect assumptions that smokers cannot or will not quit smoking, but in reality, the majority of smokers want to quit and they dislike being nicotine dependent. Most of the new products, including heated tobacco and e-cigarettes, are devices of nicotine inhalation, and therefore do not help smokers to beat their addiction to nicotine.

“There is also a lack of evidence to support the claims that e-cigarettes are more effective than established smoking cessation medications or nicotine replacement therapies, but the few independent studies that have been published indicate that e-cig and heated tobacco device use undermines quit attempts outside of a clinical setting, and show that most people use alternative nicotine delivery products alongside conventional cigarettes, rather than as a replacement.”

The statement warns that e-cigs and heated tobacco products, which are largely produced and marketed by the tobacco industry, are just another example of the tobacco industry’s long-established tactic to sell so-called safer products in a bid to deter smokers from quitting and to make smoking more socially acceptable.

The committee says several studies already confirm that e-cigs and heated tobacco products have short-term toxic effects on health, and warn that if we wait any longer to see the long-term effects, we risk facing consequences similar to those caused by ignoring the early warnings about how harmful conventional cigarettes are to health.

Professor Tobias Welte from Hannover University, Germany, is President of the European Respiratory Society. He said: “We understand that many health professionals, tobacco control professionals and policy makers who recommend harm reduction strategies may have good intentions, but there is very little evidence to support the claims that e-cigarettes and heated tobacco devices are helping smokers to quit conventional cigarettes for good.

“Although exposure to potentially harmful ingredients from e-cigarettes and heated tobacco devices may be lower than cigarettes, this does not mean that they are harmless. Until we know more about the long-term effects of their use on human health, it is irresponsible to recommend that they be used in population-wide tobacco control strategies. Evidence-based tobacco dependence treatments already exist and are safe and cost-effective, and we must utilise this. Nothing should enter the lungs besides clean air – we must not give up on smokers.” 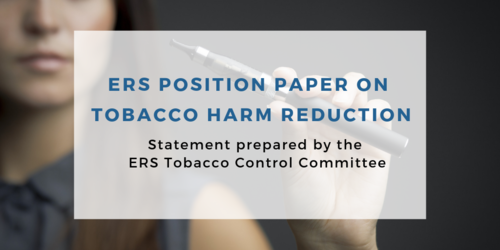