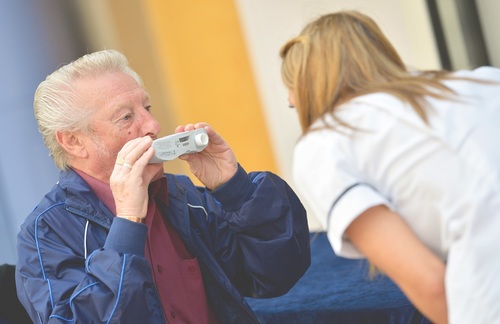 WORLD SPIROMETRY DAY - ICC - BIRMINGHAM Pictured at COPD8 at the ICC general shots of visitors being tested FOR FURTHER DETAILS CONTACT: Hanna Smith at Munro & Forster on 0207 815 3927 or hanna.smith@munroforster.com Picture by Adam Fradgley

Autoimmune pulmonary alveolar proteinosis (aPAP) is a rare disease characterized by progressive surfactant accumulation and hypoxemia. It is caused by disruption of granulocyte–macrophage colony-stimulating factor (GM-CSF) signaling, which pulmonary alveolar macrophages require to clear surfactant. Recently, inhaled GM-CSF was shown to improve the partial pressure of arterial oxygen in patients with aPAP.

The Impala study aimed to determine whether the inhalation of GM-CSF (molgramostim) vs matched placebo could change in a statistical significant manner the alveolar–arterial difference in oxygen concentration (A-aDo2) at week 24.The study was designed as a double blind placebo controlled three group trial. Inhaled GM-CSF was administered either continuously or intermittently.

138 patients were assigned to receive placebo and either the continuous schedule or/and the intermittent one. Patients were recruited on the basis of a chest CT, the results of either lung biopsy or cytologic analysis of bronchoalveolar lavage fluid, and a positive serum test for GM-CSF autoantibodies. Furthermore, were required to have an A-aDo2 of 25 mm Hg or more, a Pao2 of less than 75 mm Hg at rest while breathing ambient air or a decrease in oxygen saturation of more than 4 percentage points during the 6-minute walk test, and unremitting or progressive aPAP as indicated by improvement in the vital capacity of less than 5% or improvement in the DLco of less than 10% within 2 months before enrollment.

During the open-label treatment-extension period, for which there was no control group, improvements in the A-aDo2, DLco, SGRQ total score, and distance covered on the 6-minute walk test were observed among patients who had received continuous molgramostim, intermittent molgramostim, or placebo during the blinded intervention period. In conclusion the above study showed some beneficial effects which are mainly attributed to measurements related to pulmonary gas transfer. However no statistical significant differences were observed in exercise capacity and in the need of whole lung lavage. The continuous schedule was superior to the intermittent one.

The study gave us a positive but small message. We need to know whether these effects are confirmed in a long term basis and to better define both the dosing scheme and the time dependent schedule.