The results of the latest round of ERS Leadership Elections were announced today during the 2019 General Assembly meeting, which was attended by ERS members and senior leaders at the ERS International Congress, Madrid.

Following the meeting, it is with great pleasure that we announce the incoming ERS Vice President for 2019–2020 is Professor Marc Humbert, who will successively become ERS President Elect and then ERS President – making him a key and influential figure within our Society.

Two new Internal Auditor positions were also selected in this round of elections, in which Professors Argyris Tzouvelekis and Szymon Skoczynski will be appointed.

We would like to thank all voting members of ERS as well as all competing candidates for their participation in this important election.

Professor Thierry Troosters, the incoming ERS President for 2019–2020, was also formally appointed at the meeting. During his hand-over speech, Prof. Troosters extended his thanks to Professor Tobias Welte, now past-President, for his commitment, passion and service to the ERS over the previous twelve months and during his extended Society career.

In looking towards the year ahead, Prof. Troosters highlighted the priorities of clinical research in physiotherapy, digital health and expressed his excitement for the 30th ERS International Congress, which will take place in Vienna in 2020. Prof. Troosters said that over the next year he hopes to:

Honorary Fellows of the ERS were also nominated by Prof. Troosters during the General Assembly, and the selections included Judith Garcia Aymerich and Sally Singh. ERS is delighted to announce that both nominees were approved for the honorary positions by the membership in attendance - many congratulations to both.

ERS leaders also reported on the activities of the Society over the last twelve months in the key areas of science, education and advocacy, and ERS members who attended the meeting voted upon a number of changes to the ERS by-laws and constitution. Notable amendments to existing by-laws that were approved by the membership during the General Assembly meeting include: 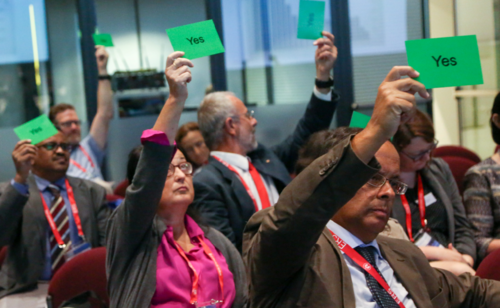