Trained medical detection dogs can differentiate between Pseudomonas aeruginosa (Pa) and other bacterial pathogens that commonly affect people with cystic fibrosis (CF) by sniffing bacteria grown in a nutrient liquid, according to a new study published in the European Respiratory Journal.

The study, supported by the Cystic Fibrosis Trust, was conducted by researchers at Imperial College London and Royal Brompton Hospital in collaboration with the Medical Detection Dogs charity.

The researchers aimed to assess whether trained dogs could accurately distinguish Pa from other bacteria that are common in CF by scent, as it is hoped that this method could offer a more affordable and less invasive method of screening lower airway infections in CF patients.

To test this, the dogs were trained and tested on customised sample presentation stands. During training, correct identification of Pa samples was rewarded. Once trained, dogs were presented with Pa-positive cultured samples, other cultured bacterial controls or sterile liquid in a random, computer-generated sequence. A positive indication (when the dog either stopped or sat down) was rewarded if correct.

The samples were then presented in a double-blind testing scenario. Four blind studies were undertaken, including:

The researchers say these results demonstrate how the trained dogs can accurately detect possible indicators of infection and disease with a high level of accuracy.

Professor Jane Davies from Imperial College London was a lead researcher on the study. She said: “This is a really exciting development. Advanced technology to detect infections, for example in breath, has proved difficult so far. The successful training of the dogs on cultured samples will now be used as the foundation for testing patient samples directly.

“People with CF could ultimately monitor their lung infections from home by sending in samples for the dogs to check. We are very grateful to those with CF, cared for by Royal Brompton Hospital, for providing samples for this project and to the CF Trust for their funding support of the next stage of this project as part of the Strategic Research Centre for Pseudomonas infection.”

With the support of the CF Trust, the research team plan to test the feasibility of using medical detection dogs to identify infection from patient samples using clinical samples such as sputum, cough tissues and breath. 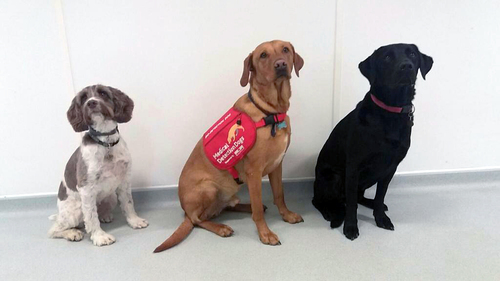