Flavourings combine with solvents in e-cigarettes to produce new toxic chemicals that irritate the airways, triggering reactions that can lead to breathing and heart and blood vessel problems, according to new research presented at the virtual European Respiratory Society International Congress.

Sven-Eric Jordt, associate professor of anaesthesiology, pharmacology and cancer biology at Duke University School of Medicine (North Carolina, USA) told the meeting that manufacturers claim that e-cigarettes are safe as they vaporise a defined set of chemicals that are chemically stable.

“Our co-author and analytical chemist Dr Hanno Erythropel and colleagues at Yale University found new chemicals in e-liquids and revealed that they are formed when components are mixed by manufacturers. We became concerned about the high levels of these new compounds that had not been studied in the past, and decided to conduct toxicological tests,” said Prof Jordt.

In lab experiments, the researchers looked at what happened when cells that line the bronchi (the main airways from the trachea to the lungs) were exposed to flavouring chemicals, such as vanillin and ethyl-vanillin (responsible for vanilla and other sweet flavours), benzaldehyde (berry or fruit flavour) and cinnamaldehyde (cinnamon flavour). They also looked at the effect of the new chemicals that formed as a result of mixing the flavouring chemicals with the solvents propylene glycol (PG) and vegetable glycerine (VG), which are the main solvents in e-cigarette liquids.

“The bronchi are exposed to e-cigarette vapour when the user inhales them into the lungs,” said Prof Jordt. “We consistently observed that the new chemicals formed from the flavours and e-liquid solvents were more toxic than either of their parent compounds. The new chemicals derived from benzaldehyde and cinnamaldehyde were more toxic than the vanillin-derived compounds.”

The new chemicals also activated sensory irritant receptors in nerve endings in the bronchi called TRPV1 and TRPA1, which are responsible for a range of inflammatory responses.

Prof Jordt said: “Activation of sensory irritant receptors can increase the heart rate and, in predisposed people, can lead to an irregular heartbeat and higher blood pressure. It can also increase secretions in the nasal passages and throughout the lungs and airways, leading to coughing and breathing difficulties.”

The researchers showed for the first time that even low concentrations of the newly-formed chemicals caused the cells lining the bronchi to die.

“This is the first demonstration that these new chemicals formed in e-liquids can damage and kill lung cells and probably do this by damaging their metabolism. Although, in some cases, more than 40% of flavour chemicals are converted into new chemicals in e-cigarettes, almost nothing was known about their toxicity until now,” he said.

Analysis of structures in the cells called mitochondria (the cells’ “batteries”) and of the mechanisms involved in converting glucose to energy, showed that the newly-formed chemicals suppressed both the ability of mitochondria to consume oxygen and the production of ATP (adenosine triphosphate), a chemical that provides energy to drive many cellular processes.

The researchers were surprised by their findings. “We actually expected that the observed chemical reactions would inactivate benzaldehyde and other flavouring chemicals, making the products less toxic. However, we observed the opposite, finding the newly formed compounds to be more irritating and toxic,” said Prof Jordt.

He said that manufacturers should list all the chemicals on their e-cigarette products – not only the original chemicals, but also those formed when the flavouring chemicals mix with the solvents and when the liquid is stored for any length of time.

“Our findings suggest that e-cigarettes release unstable chemical mixtures containing a large variety of chemical products with unexpected toxicological properties. Regulators need to be made aware that these compounds can form so that toxicology studies can be initiated to evaluate their safety. They should conduct or fund additional research on the fate of chemicals in e-liquids, and especially their toxicology. Once toxicity levels are known, regulators can assess the level of risk to health from e-cigarettes and issue recommendations to manufacturers to reduce concentrations to mitigate risks to acceptable levels,” he concluded.

In a second presentation in the same session, Dr Erythropel reported that he and his colleagues had analysed mint, vanilla and mango e-liquids in the leading US e-cigarette brand, Juul, and compared the results with Juul products sold in Canada, the UK, France, Germany and Italy where Juul was introduced during the second half of 2018 and early 2019. They wanted to determine how the chemicals providing the main flavour and the nicotine content varied in the versions available in each country.

“While the composition of Juul e-liquids was identical in the US and Canada, it differed from the e-liquids available in Europe,” he said. “Juul e-liquids sold in the US and Canada contain up to 59 milligrams of nicotine per millilitre, comprising about 5% of the liquid, but EU regulations limit nicotine content to approximately a third of that amount at 20 mg/mL, about 1.7%, which the company adhered to, based on our results.

“We found that along with lower nicotine content, the European products also contained lower amounts of flavouring agents compared to the US and Canadian products, with one exception: the reduced amount of menthol in European mint e-liquid was replaced with a synthetic coolant called WS-3, not present in US or Canadian products. WS-3 produces a cooling effect similar to menthol but without the distinctive ‘minty’ smell. The safety of inhaling WS-3 in e-cigarettes is unknown and so we believe that any legislation targeting menthol in tobacco products should be extended to synthetic coolants, as for example Germany has implemented for tobacco cigarettes.”

Jørgen Vestbo, who was not involved in either studies, is Chair of the European Respiratory Advocacy Council and Professor of Respiratory Medicine at the University of Manchester, UK. He said: “These studies show that the liquid for e-cigarettes has been made available to consumers without adequate understanding and safety tests of not only the main chemicals in the vaping liquid but also how they combine to form new, potentially toxic compounds. These findings underline the fact that e-cigarettes cannot be considered a safe alternative to tobacco cigarettes. Regulators need to take action to initiate further research into the constituent components of e-liquids and their combinations so that adequate measures can be put in place to reduce the risks as much as possible.” 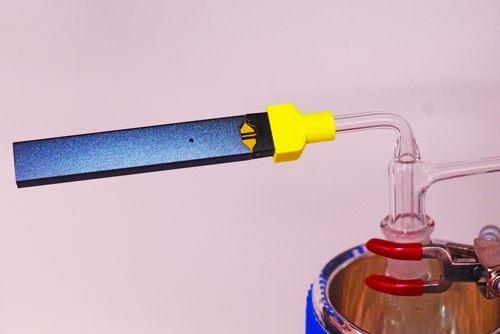