Madrid, Spain: Air pollution is linked to an increased risk of death in babies according to a study of nearly eight million live births, to be presented at the ERS International Congress on Sunday. [1]

Although it is known already that air pollution is associated with infant deaths, it is not always clear which air pollutants are linked to deaths from any cause in babies ranging in age from new-born up to one year.

The study shows that three air pollutants – particulate matter (PM10), nitrogen dioxide (NO2) and sulphur dioxide (SO2) – separately and together are associated with a 20-50% increased risk of death for babies born in the most polluted areas when compared with those born in the least polluted areas.

Dr Sarah Kotecha, a research associate at the Cardiff University School of Medicine (Cardiff, UK), will tell the congress: "We found that NO2, PM10 and SO2 are each linked in varying degrees to infant deaths from any cause, and to neonatal and post-neonatal deaths. This is an important finding as the pollutants are produced and derived from different sources."

NO2 and PM10 are produced mainly from traffic and SO2 is predominantly produced by industrial activities, such as burning fossil fuels for energy generation and metal extraction from ore.

Dr Kotecha and her colleagues analysed data from 7,984,366 live births and deaths that occurred in England and Wales between 2001 and 2012 obtained from UK's Office for National Statistics. They divided the country into approximately 35,000 small areas, each with a similar population size of 1,500 residents or 650 households. They obtained pollution data from each area for each year, and calculated the annual pollution exposure before linking the pollution exposure to death rates in each area. They obtained information on the average annual pollution in England and Wales between 2001 and 2012 from the UK's Department for Environment, Food and Rural Affairs.

Dr Kotecha said the reason why SO2 was associated with an increased risk of neonatal deaths while the other pollutants were not might be due to different biological mechanisms.

"A possible mechanism to explain this could be the transfer of SO2 via the mother's placenta to the developing foetus," she said.

She concluded: "Our findings show that although progress has been made, the challenge remains to reduce air pollution in order to reduce the numbers of infant deaths. In the meantime, by understanding how pollution affects babies, either directly or via the mother, we may be able to target appropriate therapies or other interventions, depending on the amount of exposure to the different types of pollutants."

In a second presentation to the congress on Sunday, Anna Hansell, Professor in Environmental Epidemiology and Director of the Centre for Environmental Health and Sustainability at the University of Leicester, UK, will say that exposure to air pollution from road traffic as early as the first trimester of pregnancy and in early life is associated with small but significant reductions in children's lung function at the age of eight years.

The UK Avon Longitudinal Study of Parents and Children (ALSPAC) is the largest study to investigate the impact of PM10 from different sources, including road traffic, on lung development and growth, and to analyse it by each trimester of pregnancy, as well as during infancy and childhood.

Between 1990 and 2008, researchers calculated exposures to PM10 in 13,963 children for each trimester, and at the ages of 0-6 months, 7-12 months and then annually to the age of 15 years. They measured the volume of air that the children could force out in one second (FEV1) and the maximum amount of air they could forcibly exhale after taking the deepest possible breath (FVC) at the age of eight and 15 years. The results were adjusted for age, gender and height.

The average amount of PM10 derived from road traffic that the children were exposed to was one microgram per cubic metre of air (mcg/m3), but exposure varied from zero to eight mcg/m3 over the periods measured. Every 1 mcg/m3 increase above zero in exposure to PM10 from traffic during the first trimester was associated with a 0.8% reduction in lung function. This corresponds to an average reduction in FEV1 and FVC lung function of 14 and 16 millilitres, respectively, by the age of eight years. The researchers found similar associations for exposure to traffic PM10 during the second and third trimesters, over the whole pregnancy, and up to the age of eight. Exposure to PM10 from all sources during the third trimester was significantly associated with reduced lung function.

"We found that exposure to road traffic PM10 in very early life showed harmful associations with lung function in eight-year-olds," said Prof Hansell. "Associations were stronger among boys, children whose mother had a lower education level or smoked during pregnancy.

"Our findings suggest that air pollution in pregnancy and early life has important impacts on lung function in early childhood; it may affect children's development and potentially also their long-term health trajectory."

The researchers did not see similar associations between traffic pollution and lung function in children at the age of 15 years.

"We think this may be because air pollution levels, particularly diesel emissions, were reducing over the time that the lung function was increasing in these analyses. However, it is also possible that the effect of air pollution is small and that lung growth is able to outpace the adverse effects by teenage years," said Prof Hansell.

She said it was unclear how traffic pollution could affect childhood lung function, particularly during pregnancy. One mechanism could be that particles cross the placenta and disturb the development of the growing foetus's lungs through oxidative stress (an imbalance between free radical molecules and antioxidants). Another mechanism could be that prenatal exposure could induce epigenetic changes (changes in gene function that do not involve changes in DNA sequences).

Prof Hansell concluded: "It's really important to prioritise reduction of air pollution levels to improve respiratory health. In separate work, we have also shown associations with lower lung function in adulthood, suggesting that air pollution contributes to ageing of the lungs. Lung health is a marker of general health and associated with numerous other chronic diseases."

Jørgen Vestbo, Chair of the European Respiratory Society's Advocacy Council and Professor of Respiratory Medicine at the University of Manchester, UK, was not involved in the study. He said: "Air pollution affects 100% of the population as it cannot be avoided, and these studies highlight the harmful effects that are linked to being exposed to dirty air from the very beginning of our lives. Lots of previous research has shown that in the long term, outdoor air pollution can reduce life expectancy, affect lung development, increase asthma incidence and lead to other chronic respiratory diseases.

"Breathing is the most basic human function required to sustain life. We cannot give up the fight for the right to breathe clean air, and we must continue to apply pressure on policymakers to ensure that maximum pollutant levels indicated by the World Health Organization are not breached across our cities and towns in order to protect the health of young babies, as well as the wider population."

OA482: The MRC grant and additional core support for the cohort was provided by MRC, Wellcome Trust, and the University of Bristol. 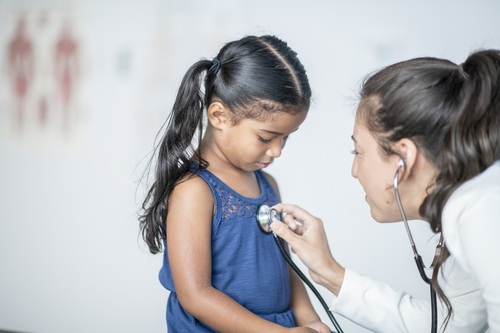