Children with asthma may be at higher risk of developing obesity

Researchers in the USA have found that children with asthma may face a heightened risk of becoming obese in childhood.

Published in the American Thoracic Society’s American Journal of Respiratory and Critical Care Medicine, the study sought to understand the relationship between the two health conditions, which frequently co-occur in childhood.

An initial primary analysis was carried out using a cohort of 2,171 children aged between 5-8 years of age at the time of study entry; all children within this group were reported to be non-obese and 13.5% of the group had asthma. This group was followed up for up to 10 subsequent years.

An additional replication study was performed using another cohort of 2,684 non-obese children, followed up from mean ages of 10-18 years, to confirm findings of the primary analysis and to examine if asthma medication use influenced obesity risk. The researchers also adjusted for a number of covariates including access to health insurance, BMI at enrolment, ethnicity, family income, smoking exposure at home and physical activity.

The results showed that children presenting with asthma at the time of study entry were at a 51% increased risk of developing obesity during childhood and adolescence when compared to children without asthma [HR (95% CI)=1.51 (1.08, 2.10)]. Researchers then excluded 120 children who were obese at only one follow-up visit, and found a further consistent association between baseline asthma history and a higher risk of obesity to confirm their results. Contrastingly however, the researchers found that use of asthma rescue medications reduced the risk of developing obesity by 43%. [HR (95% CI)=0.57 (0.33, 0.96)].

The study concludes that childhood asthma contributes to the development of childhood obesity, and the authors advise that early interventions are key to stemming the development of obesity in childhood and adolescence to avoid health complications than can occur later in life. Study limitations included relying on parents to report asthma diagnosis, limited information about exercise and no information about diet. 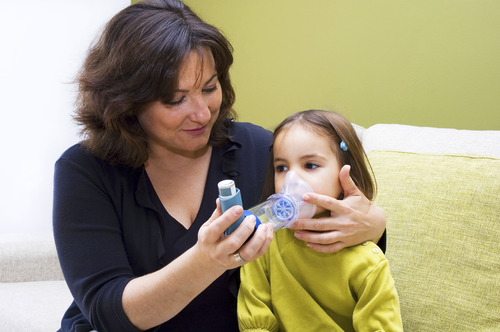