Madrid, Spain: Professional drivers working in congested cities are exposed to black carbon levels that are on average a third higher than would be experienced at a busy roadside, according to research presented at the European Respiratory Society International Congress. [1]

However, the study suggests that professional drivers can take simple steps to protect themselves from pollution, such as driving with their windows closed.

The research was presented by Shanon Lim, a research assistant and PhD candidate at King's College London, UK. It was a collaboration between researchers at King's and researchers at Queen Mary University of London.

Mr Lim said: "We know quite a lot about the dangers of exposure to traffic pollution. However, there has been surprisingly little research on levels of professional drivers' exposure to pollution and its effects on their health. We believe there are around a million people working in jobs like these in the UK alone, so this is a widespread and under-appreciated issue."

The researchers recruited 140 professional drivers from a range of occupations working in central London. The drivers were asked to carry black carbon monitors, which were linked with GPS trackers, for a period of 96 hours. The monitors measured exposure levels once every minute. Drivers were also asked about the type of vehicle they drive, their working hours and whether they drive with their windows or air vents open.

The results showed that, on average, professional drivers were exposed to 4.1 micrograms of black carbon per cubic metre of air (µg/m3) while driving, which was around four times higher than their exposure at home (1.1 µg/m3). Researchers say the levels recorded at home are similar to levels experienced by office workers at their desks. Professional drivers also experienced extremely high spikes in exposure to black carbon, often exceeding 100 µg/m3 and lasting as long as half an hour.

During the same period of time, researchers found that pollution levels at a busy London roadside (Marylebone Road) were 3.1 µg/m3 on average and, away from the roadside, the average level in London was 0.9 µg/m3.

Mr Lim said: "Our study suggests that professional drivers are exposed to high levels of traffic pollution while at work. Because these levels are higher than those we find at the roadside, this suggests that being inside a vehicle doesn't necessarily offer any protection, in fact the opposite may be true: that air pollution can get trapped inside the vehicle for extended periods of time.

"We don't know for sure why taxi drivers fare the worst, but it might be because taxis tend to operate in the busiest and most polluted parts of the city where 'street canyons' restrict the movement of air. On the other hand, emergency services can avoid congestion when they are attending an incident."

The research also showed that keeping windows closed while working halved the levels of black carbon for professional drivers. The type of vehicle and the choice of route could also lower exposure.

The researchers will continue to study the data they have gathered. They also plan to investigate possible strategies for protecting drivers, such as the use of air filters. "This is vital to help employers, occupational safety and health professionals and individual workers reduce exposure and minimise work-related health risks," said Mr Lim.

Barbara Hoffman, Chair of the European Respiratory Society's Environment and Health Committee and Professor of Environmental Epidemiology at the University of Düsseldorf, Germany, was not involved in the study. She said: "This research highlights the risks for taxi drivers, and other professional drivers, and shows how high their exposure to pollution can be, even compared to levels at a busy roadside.

"In the short term, drivers can protect themselves better by keeping their windows closed. However, in the longer term, we need to protect workers from traffic pollution by looking for ways to keep the air inside vehicles cleaner but also by redesigning our cities to create more efficient ways to move people and goods around and increasing our use of greener travel solutions, such as electric vehicles."

The Institution of Occupational Safety and Health (IOSH) are the sole funders of this study. A detailed report on the results and recommendations on how companies can reduce their drivers' exposure will be published by IOSH at the beginning of 2020. 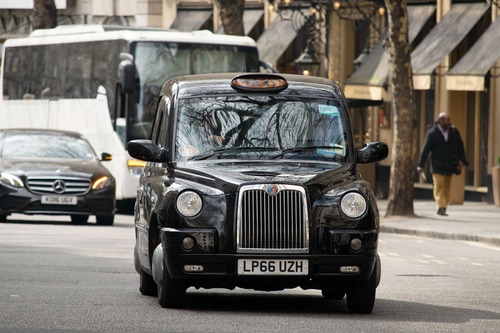