Precision medicine in COPD: from hope to disappointment

A blog by Frits M.E. Franssen

Recently, a 66 year old former-smoking man with severe chronic obstructive pulmonary disease (COPD) visited my outpatient clinic in Maastricht University Medical Center for a second opinion. His condition progressively worsened after hospitalization for pneumonia in the last year. His shortness of breath makes it difficult for him to shower and get dressed and he has not been able to walk to the shop in the last months. He’s using inhalation therapy with two long acting bronchodilators and an inhaled glucocorticosteroid (ICS) and uses oxygen therapy at home whenever he’s dyspneic. He does not have daily sputum production. His weight slightly increased over the last months, which he relates to his decreased physical activity because of dyspnea and lower back pain. The patient says his quality of life is poor. Although he’s realistic and not anxious regarding the progressive nature of his dyspnea and physical limitation, he asks for additional or new medications. Since another member of his COPD Facebook group was recently treated with endobronchial valves and responded very well, the patient wonders whether he’s eligible for this intervention too. Except for hypertension, the rest of his medical history did not reveal any clinically relevant facts and he has no previous history of asthma. After a routine and non-alarming physical examination, we agreed that I would order diagnostic tests including lung function, blood gas, chest X-ray, body composition, functional capacity and laboratory and that we would discuss potential treatment options afterwards. Hopeful that I would be able to improve his poor condition, he left my office…

It is well-recognized that COPD is a heterogenous condition, characterized by various and largely independent pathophysiologic features in the lungs [1] and a great number of extra-pulmonary manifestations and comorbid diseases that seem to co-occur in specific patterns [2]. Although the diagnosis of COPD is still based on an obstructive pattern during spirometry, the Global initiative for Obstructive Lung Disease (GOLD) partly took this heterogeneity into account by introducing a disease classification based on symptoms and future risk [3] and a more precise and stepped approach regarding pharmacotherapy in COPD. However, stratification of COPD patients into quadrants does not enable full-scale precision medicine, in which treatments are directed to the needs of individual patients on the basis of genetic, biomarker, phenotypic, or psychosocial characteristics that distinguish COPD patients with similar clinical presentations from each other [4]. As a next step, the ‘treatable traits’ concept was introduced, consisting of the identification of treatable airway and nonairway attributes in patients with COPD and successive treatment of these [5]. Obviously, the list of treatable traits is limited by current knowledge and will expand as more targeted treatments become available. Indeed, over the last decade, treatment options for patients with COPD have greatly expanded with the introduction of novel pharmaco- and other therapies and the application of existing therapies to specific disease phenotypes. Also, in- and exclusion criteria for eligibility for the treatment of the various traits in COPD are proposed, indicating which patients are most likely to have a treatment response. However, diagnostic criteria for absence of response or for high likelihood of side-effects are also part of precision medicine but are often overlooked. For example, current smoking is considered a predictor of non-response to azithromycin in terms of exacerbation reduction [6]; low blood eosinophils (< 100 cells/µl) is increasingly recognized as a biomarker for poor response to ICS with respect to prevention of exacerbations [7]; insufficient degree of hyperinflation and presence of collateral ventilation are predictors of non-response to bronchoscopic lung volume reduction in severe emphysema [8]; long-term oxygen therapy does not provide benefit in COPD patients without severe resting hypoxemia [9]. Following extensive clinical characterization of an individual patient, application of these and other selection criteria will indeed result in a more precise COPD management, although we need to realize that measuring up to these criteria does not imply a positive treatment response and absence of side-effects for that individual. Also, from the patients’ perspective, straight forward application of a list of diagnostic criteria may have an effect opposite to a personalized approach when the patient is rejected from potentially beneficial interventions. Also, as healthcare professionals and scientists focusing on COPD, we need to be aware that most of the novel therapeutic options in this disease are targeting the most severe category of patients, while also in patients with less severe disease, the burden of disease is substantial [10] and there is a need for innovation and targeted therapies.

After completion of the assessment of treatable traits of his disease, the patient and his partner visited me to discuss the results. I confirmed that he has severe COPD (FEV1 36% of predicted) with hyperinflation at rest (RV 148% of predicted and RV/TLC 0.51) and low diffusion capacity (DLCO 54% of predicted). I classified him as COPD GOLD 3, quadrant D, taking his symptoms and hospitalization into account. Arterial blood gas analysis showed normoventilation at rest without supplemental oxygen (PaO2 8.5 kPa, paCO2 5.8 kPa). The chest X-ray was normal except for typical signs of COPD. The six-minute walk distance without additional oxygen was 336 meters with desaturation from 94 to 90%. Dual energy X-ray absorptiometry (DEXA) indicated normal fat-free mass (FFM index 17.6 kg/m2) and osteoporosis (T-score -3.1). Hematology results showed eosinophil counts of 75 cells/µl and dyslipidemia.

Based on these results I carefully explained my personalized therapeutic options; 1) although he has severe airflow limitation with high symptoms and reduced exercise tolerance, the degree of hyperinflation does not warrant computed tomography screening for endobronchial lung volume reduction treatment [8]; 2) instead of adding respiratory medications, I suggested to withdraw ICS since he did not have a history of asthma, nor a history of frequent exacerbations, while he did have pneumonia in the last year and eosinophils are low and thus his risk-benefit ratio was high [7]; 3) as he had no history of frequent exacerbations, I did not propose the initiation of a macrolide or PDE4-inhibitor [3]; 4) we discussed the treatment of dyspnea with opiates [11]; 5) I proposed to stop his oxygen supplementation as he did not have a medical indication and his use was irrational [9]; 5) I proposed to start a bisphosphonate, calcium and vitamin D supplementation for osteoporosis and a statin for dyslipidemia [12]. While talking, I sensed my patient becoming more and more uncomfortable and disappointed. Instead of proposing new treatments that might improve his condition, I took away his hope for bronchoscopic intervention, was suggesting to withdraw one inhaler and stop his oxygen therapy, proposed to start medications directed at nonsymptomatic medical conditions he was not even aware of having and suggested to initiate palliative care with opiates for which he obviously was not prepared. He became angry with me, telling me I am a poor physician, not being able to help him. After dealing with his discontent, again explaining the rationale behind my recommendations and arranging a consultation for follow up, I realized that indeed a precise medical approach may have a disruptive effect on our desperate patients.

Over the last years, diagnostic possibilities and treatment options in COPD have greatly expanded. In contrast to the ‘one size fits all’ approach and therapeutic nihilism of the past, clinicians and other healthcare professionals are increasingly aware of the treatable traits of the disease, resulting in a more positive and active approach towards this still uncurable disease. As patients become better informed about disease management possibilities and patients and their loved ones/carers play a central role in the personalized management of COPD, we need to realize that only a minority of, mostly very severe, COPD patients may benefit from the advances in precision medicine in COPD. Highly symptomatic patients may visit our consultations hopeful of profiting from the clinical and scientific advances but may leave our office very disappointed. It is our task to explain (contra-)indications for precision interventions, remain critical regarding patient selection for targeted and add-on treatments and re-assure our patients that we care for them even when we cannot give them what they hoped for.

Dr. Frits M.E. Franssen is chest physician, medical coordinator and clinical research theme leader in CIRO, a centre offering specialised treatments for patients with chronic lung diseases in Horn, the Netherlands. He is also a consultant of respiratory medicine at Maastricht University Medical Centre in Maastricht, the Netherlands. His field of expertise is COPD as a respiratory and systemic disease, and pulmonary rehabilitation, and Frits is the chair of ERS group Rehabilitation and chronic care (01.02) and has contributed to several ATS/ERS taskforces. Further, he is (co-)author of more than 160 peer-reviewed English-language articles related to systemic consequences of COPD and pulmonary rehabilitation. In 2016, Frits was honoured with the ‘Early career achievement award’ by the Pulmonary Rehabilitation Assembly of ATS. You can follow Frits on Twitter: @fritsfranssen 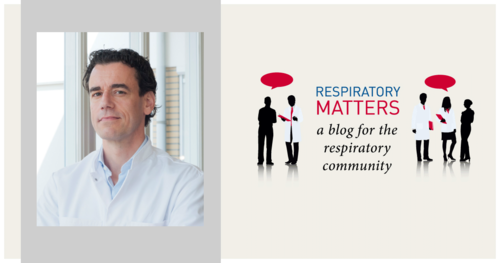