The ERS President Prof. Tobias Welte, alongside ERS Past-President Prof. Klaus Rabe and research group colleagues Profs. Werner Seeger and Erika von Mutius have been awarded the prestigious 2019 Balzan Prize for their influential work on the pathophysiology of respiration within the German Centre for Lung Research (DZL).

The Balzan Prizes are awarded annually to four individuals or a group of scholars and scientists that have achieved common results, who are distinguished in their fields on an international level. The aim of the Balzan Prizes is to foster culture, the sciences and the most outstanding humanitarian initiatives of peace and brotherhood among peoples, regardless of nationality, race or creed.

The award to Prof. Welte and colleagues was presented by Peter Suter, Honorary Professor of Medicine at the University of Geneva and former President of the Swiss Academy of Arts and Sciences, who also sits on the Balzan General Prize Committee.

He said that the award recognises: “the outstanding achievements of four exceptional scientists working on respiratory diseases, Erika von Mutius, Klaus Rabe, Werner Seeger and Tobias Welte, who, under the leadership of Seeger, joined their efforts in translating innovative research into new treatments to improve the quality of life for these patients, while also motivating and training the next generation of scientists, within their common German Centre for Lung Research.”

ERS extends its congratulations to the awardees for this prestigious achievement, and thanks them for their dedication and continued contributions to the enhancement of respiratory medicine and science. 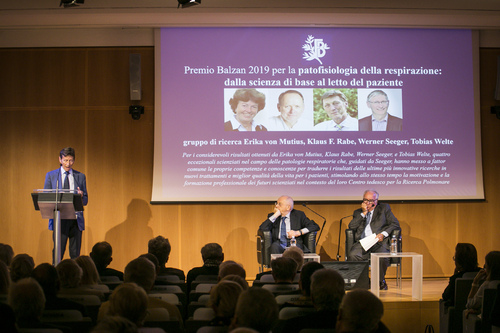